Beyond the Nest Reviews Geva's QUEEN | Kids Out and About Dallas

Beyond the Nest Reviews Geva's QUEEN 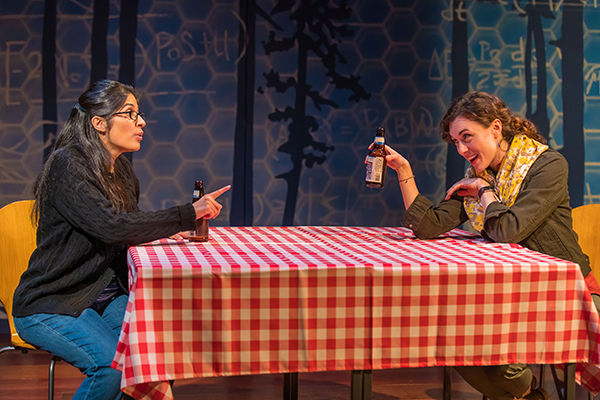 Queen opens on two Ph.D. candidates celebrating that they are on the verge of having a groundbreaking paper published in a major scientific journal and presenting it at a prestigious conference. Their research attributes the decimation of the world’s honey bee population to a chemical in one of the most prominently-used pesticides. At the last moment, the final influx of data skews the results so that a longer time frame of study is needed to validate the findings.

Although this play is honeycombed with science and math (but rest assured you don’t need to be a whiz at either to enjoy it), it really explores ethics in society: Where is each individual’s line in the sand that can't be crossed?

It also addresses the ethical issue of corporate financing of scientific research, and whether the results may thus become suspect in the pursuit of the desired answer.

Sanam Shah (Nikhaar Kishnani) and Ariel Spiegel (Marina Shay) are the collaborators on the paper. As the women’s academic advisor, Dr. Philip Hayes (Ezra Barnes) is initially supportive and encouraging, but transforms to desperately manipulative in his frantic desire to get his own name in lights, based on the strength of his students’ paper. Barnes turns in a strong and believable performance as the “good guy” who ultimately has little conscience about viciously stinging those who oppose his will.

For Sanam Shah (Nikhaar Kishnani), the level-headed and brilliant mathematician who developed the model for the study, the choice is clear: math is the god whose rules must be obeyed. Once the results have skewed, she becomes adamant that the study is not ready to be presented or published. Enter Arvind Patel (Nik Sadhnani), a cavalier Wall Street Analyst with which her family matches her, in a campaign to get her to marry. In seeing a different perspective on the study through his eyes and those of Ariel, even the highly ethical Sanam begins to question her values and flirts with “crossing over to the dark side” when she is persuaded it may be for the greater good.

Kishnani beautifully nails the character of Sanam. As a female scientist unused to the attentions of men, she is secure in her intellectual brilliance but insecure in her social interactions. The scenes between Sanam and Arvind are funny and purposefully awkward — the two have very different personalities and values — and are a study in the attraction of opposites. Sadhnani endows Arvind with a honeyed mix of arrogance and intellect, along with a swashbuckling charm to which Sanam succumbs.

Ariel Spiegel (Marina Shay), the daughter of two former bee keepers, has invested seven years and her whole self in the study. She believes the study will save the world for her two-year-old daughter. Class distinction comes into play as Ariel sees her and Sanam's careers teetering on disaster and points out that, even if Sanam loses her Visa, she can return to her wealthy family, while she herself has no resources whatsoever to sustain herself and her daughter. She seems willing to stop at nothing to save her work.

Pirronne Yousefzadeh, Director of Geva’s 2018 Production of Heartland, does a masterful job of directing this production, sensitively infusing cross-cultural differences and influences.

At a time when climate change and the environment are of critical concern, the talented Madhuri Shekar challenges audiences to think about the ethics behind our actions. The play is simultaneously sobering and uplifting. Just as no one scientific paper will actually save the planet, neither will one play. But in the true roll of the arts, this play moves the conversation forward.

Make a beeline for the box office to see Queen on the Fielding Stage through November 24. Click here for information and Tickets.

Carol White Llewellyn is Editor of BeyondTheNest.com and the host and producer of Conversations with Creatives, a cable and online TV program that explores the arts and celebrates artists and their work.