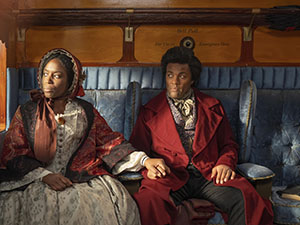 Frederick Douglass was one of Rochester’s most prominent citizens, as well as an American social reformer, abolitionist, orator, writer, statesman, and the most photographed man of the 19th Century, yet many people know little about his life. A new exhibition at the Memorial Art Gallery entitled Lessons of the Hour – Frederick Douglass, a “meditation on the life, words, and actions of Frederick Douglass,” delves into his life across the span of his 77 years.

I had the great fortune to hear John Hanhardt, American author, art historian, and curator of the exhibition, interview Isaac Julien, the mastermind behind the exhibition. Lessons of the Hour is part of MAG’s “Reflections on Place” series of media art commissions. Although it can be referred to as a video installation, it is far more than those two emotionless words suggest. It is a breathtaking, immersive experience.

Through extensive research, Isaac Julien focuses on elements and aspects of Douglass’ life that are core to who Frederick Douglass was, with a strong emphasis on the women who influenced his life, and the power of his words. Surprising, fascinating aspects emerge, such as his love of horses and his relationship with trains. The fluid use of clocks, sound, and visual images reinforces how his influence ripples across time.

Jullien makes brilliant use of 10 different screens of diverse sizes to draw us in… whether it is into the cotton fields in which he toiled growing up, onto the moors to which he escaped in order to evade being returned to slavery, into the studios where his image was forever frozen through daguerreotype, or into his home where Anna  Murray Douglass worked diligently at her sewing machine.

It is difficult to describe the astonishing impact of this exhibition since it goes far beyond the beautiful visuals to involve the intellect and emotions. Actors who resemble their historic counterparts were hired to portray the principle characters. Isaac Julien spoke about Ray Fearon, the British Shakespearian actor who plays Douglass, and how exacting he was in his treatment of his character. Fearon took lessons to replicate the exact regional dialect Douglass would have had. They filmed in numerous locations, including Frederick Douglass’ Cedar Hill home. The project was undertaken by a crew of over 100 professionals. 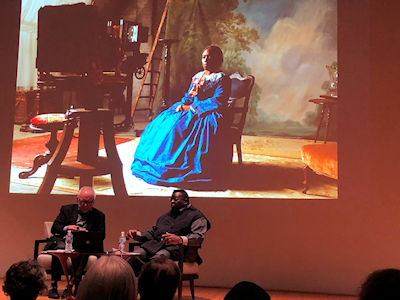 Sunday, March 3 was the opening, and Mr. Julien was there for a 2 pm discussion and interview. Following the formal program, he stood in the back viewing the exhibit and, I assume, watching people’s reactions. Viewer after viewer approached to thank him and share how moved they were by the piece.

Although he was heading off to open another exhibition, Mr. Julien generously allowed me to videotape one question about his hopes for the exhibition. Click here to see his response.

Lessons of the Hour - Frederick Douglass will be on display at MAG through May 12. If you are a history buff, an aficionado of all things Douglass, or you love film and media, this is an exhibition you must not miss.

Please note: There are a few visuals that may be too graphic for young children.